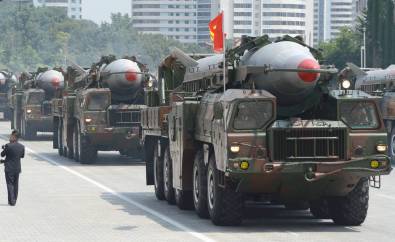 I remember that during the Cold War I was afraid that the USSR was genuinely going to attack the US. I believed that their nuclear missiles were going to target where I live and kill us all. After all, I live in an area where there are several military bases in close proximity to each other. It made sense that they would aim for us. I was afraid.

As a Bipolar sufferer who also has General Anxiety Disorder I am finding myself feeling similar feelings now, all these years later. Even before Trump is President I feel threatened and in danger. What will he do to our nation? How will it impact me? Will I lose my SSI income? It isn’t much, but it almost pays the rent. How will other nations respond to him? He seems to be reaching out to some of our enemies and greeting them as friends. Others he threatens and says things that seem to indicate that he can control their actions. For example, when North Korea announced that they were going to test nuclear missiles that could reach the US Trump said, “It won’t happen.” (“North Korea just stated that it is in the final stages of developing a nuclear weapon capable of reaching parts of the U.S. It won’t happen!” tweet – Donald Trump)

I think about this way too much to be healthy. Every single time I hear about him on the news they are normally reporting on another one of his unfiltered tweets. What a joke. He needs someone to take away his phone and close his twitter account. Loose lips sink ships and they also scare me, here, in my home. I’m not having a panic attack over this, but I admit I’m afraid.

I actively turn my attention to other things when the news covers Trump. Often I won’t even watch it even though I’d like to know what’s going on in the world around me.

Do you understand what I’m feeling? Do you feel the same way?

Subservience to Stress: The Ruminating Robin

We Must Adapt, But It Might Not Be How You Expect